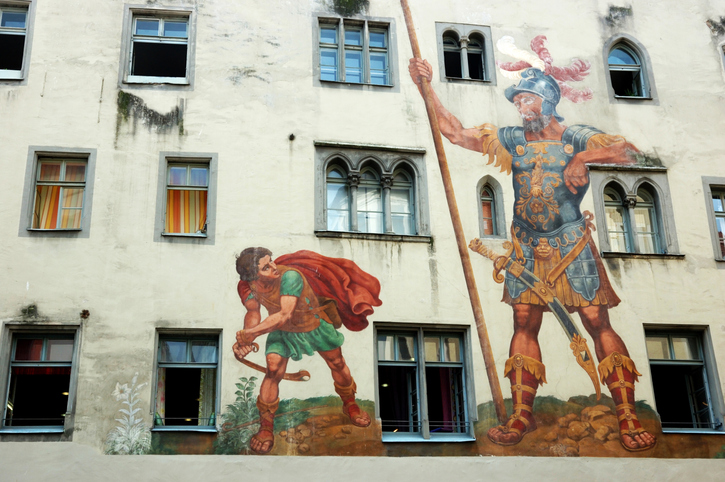 The biblical story of David who defeated the Philistine giant, Goliath is often used as a metaphor for the underdog overcoming the odds. In the story, David the shepherd boy “triumphed over the Philistine with a sling and stone”. Through the prism of the David and Goliath paradigm, a small or medium-sized enterprise would be the underdog going into legal combat with the multinational corporation. However, the tactical advantage afforded by extensive financial resources does not always guarantee victory on the legal battlefield. In the wise words of Mark Twain, “it’s not the size of the dog in the fight, it’s the size of the fight in the dog”.

Want to keep up to date with commercial news?

Facts: On 11 April 2017, Irish fast-food restaurant chain Supermac founded by Pat McDonagh in 1978 filed a revocation action before the EUIPO in relation to the word mark BIG MAC.

Decision: The revocation action was successful and it was held that the BIG MAC mark should be revoked in its entirety (i.e. removed from the EU trademark registry). It was found that McDonald’s had not proven genuine use of the contested mark for any of the goods and services for which it is registered.

Comment: Prima facie the EUIPO decision is surprising if not shocking because BIG MAC is synonymous with McDonald’s. This case highlights the importance of the quality of evidence that is submitted to prove that a trademark was genuinely used in the relevant territory during the relevant time period. The trademark proprietor must submit evidence of commercial transactions such as online sales or brick-and-mortar operations.

Facts: The applicant, Inditex is the owner of fashion brands such as Zara, Pull&Bear and Bershka. Based on its earlier EU trademark registrations for the word mark ZARA, Inditex had filed a notice of opposition against the EU trademark application for the figurative (logo) mark ZARA TANZANIA ADVENTURES. The applicant was appealing the decision of the EUIPO Board of Appeal that the contested application should proceed to registration in green and yellow.

Decision: The decision of the EUIPO Board of Appeal was partially annulled. There was a risk that the use of the trademark applied for would take unfair advantage of, or be detrimental to, the distinctive character or repute of the Inditex’s earlier trademarks.

Comment: The General Court rejected Inditex’s argument that the contested application was conceptually identical to the earlier marks for the word mark ZARA. The additional elements of “Tanzania” and “adventures” distinguished the mark from the earlier marks as the relevant public would understand these terms as denoting adventures taking place in East Africa.

The EUIPO acknowledged that there is a trend for fashion brands to diversify their revenue streams by expanding into other markets and business sectors. Luxury brands that have entered into the restaurant market include Prada (Pasticceria Marchesi), Burberry (Thomas’s Cafe) and the latest entrant Louis Vuitton (Le Le Café V and Sugalabo V ). Fashion brands operating in the hotel sector include Versace (Palazzo Versace Gold Coast and Palazzo Versace Dubai), Armani (Armani Hotel Milano and Armani Hotel Dubai) and Fendi (Fendi Private Suites). This is exactly why there is scope for the public to perceive a contested trademark to be linked to earlier marks despite the differences between the goods and services.

Comment: This case is a classic example of “David versus Goliath”. Bentley Motors was relying on its preeminent reputation in the luxury motor cars industry to undermine the modest reputation of Bentley Clothing. Despite the high legal costs incurred and the significant diversion of management attention during the long-running saga, Bentley Clothing like David was able to prevail over a formidable opponent. Bentley Clothing tactically deployed their proverbial slingshot and stone to establish infringement of the Series Mark and the word mark Bentley by asserting that Bentley Motor’s Combination Mark constituted use of the Bentley mark.

COVID-19 & the Entertainment Industry: Event Cancellation Insurance to the Rescue?