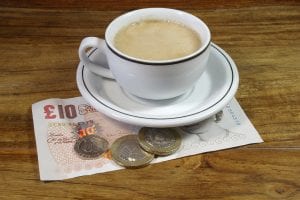 Welcome to The Lawyer Portal’s Monthly News Summary. This month’s post will cover the news stories from the 1st October 2018 to the 31st October 2018. This month Theresa May has said that under a new law waiters are to be paid all tips, Brett Kavanaugh is sworn in to the Supreme Court in the USA, the UN has said that the UK is endangering people’s health by denying their right to clean air and jailed preacher Anjem Choudary faces strict controls after release.

Restaurants will be legally barred from keeping tips from staff under plans to be announced by Theresa May. The move follows a public outcry in 2015, when it emerged that many High Street chains routinely took up to 10% of tips paid by credit and debit card. The fact that most chains have since stopped this practice, typically charging a much lower fee of 2.5% of tips paid by card. The hospitality trade body said the fact restaurants had acted voluntarily meant new legislation was unnecessary. Mrs. May said the “tough” legislation would apply to England, Scotland and Wales, was part of the government’s push to end exploitive employment practices. In 2016, Sajid Javid, then Business Secretary, said tips should go in full to waiting staff and announced proposals to stop employer deductions from them, but stopped short of legislating. Charles Archer, a part-time waiter at Pizza Express, said he retained all his cash tips. With card tips, he keeps 70% with 30% going to kitchen staff but there is no admin fee. He said he did not expect the proposed legislation to change the situation of tips being shared with all restaurant staff unless the law specifically stated that tips had to go to the person that served them. A restaurant owner, who runs four restaurants, but did not want to be named, said he welcomed the legislation because diners expected their tips to go to people who served them, not the restaurant. However, he did suggest that service tips should be shared with kitchen staff as otherwise the equality is not there between experienced back of house staff and newer waiting staff. Want an interesting piece of legal news to discuss? Click here to find out more. >>

President Donald Trump’s controversial nominee for the Supreme Court, Brett Kavanaugh, has been sworn in following weeks of debate and controversy across the world. The Senate backed his nomination by 50 votes to 48. Mr. Kavanaugh has been embroiled in a bitter battle to stave off claims of sexual assault, which he denies. However, following investigation by the FBI, enough senators decided to support to nomination. His confirmation stands as a victory for Mr. Trump ahead of the mid-term elections due to be held in November. Following the successful vote, Donald Trump sent out a tweet of congratulations and later spoke to the reporters aboard Air Force One, saying Mr. Kavanaugh had withstood a “horrible attack” and that “women” were outraged at what had happened to the nominee. He went on to say that the woman who had accused Kavanaugh of sexual assault, Christine Blasey Ford, had named the wrong person. The vote caused mass controversy in the media has hundreds of people protested Mr. Kavanaugh’s nomination at the US Capitol in Washington. As the vote was taking place, other protesters shouted “shame” from the gallery and Vice-President Mike Pence had to call for order to be restored.

The United Nations has urged the Conservative Government of the UK to “step up and show leadership” amidst an air pollution crisis. The special rapporteur on human rights and the environment has said that the UK government is putting the health of millions of citizens at risk by failing to tackle air pollution. David Boyd said people’s right to breath clean air was being violated. Moreover, he called on the UK to take the lead in introducing new clean air legislation to raise standards, protect its citizens and meet its climate obligations. This news follows various scientific studies presented over the last few months which highlight the long-term damage air pollution is doing to the health of the general public – causing consequences such as asthma, dementia, damage to unborn babies and heart disease. The UK government has been widely criticized for its failure to tackle air pollution and is one of six countries to be taken to the European Court of Justice over their toxic air. This call upon the UK has come after a landmark UN climate report that warned we only had 12 years to change our ways and avert disastrous climate change. Want more top law stories? Click here to find out. >>

Finally, convicted Isis supporter and preacher Anjem Choudary has been placed under severe restrictions including restricting his internet use and ability to speak in public. The Isis supporter was released on Friday the 26th October after serving half of a five-and-a-half-year sentence he received in 2016 for urging support for Isis and pledging allegiance to the terrorist group. This will mean that Choudary will in effect be banned from making public statements following his release from prison, as British authorities seek to stop him from inciting support for terrorism. He will be released on licence, which allows British authorities, after consulting counter-terrorism investigators, to impose strict conditions restricting his freedoms while he completes his sentence in the community. Both MI5 and Scotland Yard’s counter-terrorism command believe Choudary still poses a danger. Choudary will be banned from leaving London and using the internet without permission. He will also be restricted to a single phone that can be inspected at any time. Furthermore, the United Nations has placed him on a blacklist, meaning his assets are frozen and he is banned from international travel. Read more Monthly Legal News Round-Ups here: