What Has Bodyguard Got to Do With Law? 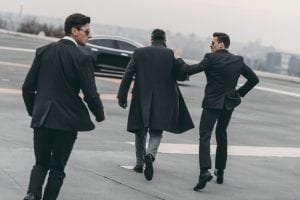 We recently released an article discussing the RIPA 18 and whether the act in the hit TV series Bodyguard was accurate. In this piece, we go further into the believability of the show by studying the Royalty and Specialist Protection Branch.

Over 6 episodes the BBC treated viewers to an enthralling series aptly titled The Bodyguard, starring Richard Madden and Keeley Hawes. It charted the career of Detective Sergeant David Budd. After having successfully foiled a terrorist plot at London Euston he is promoted to act as a so-called bodyguard for ambitious Home Secretary Julia Montague. The series is of course fictitious in nature but it is important from a legal perspective to assess just how it measures up compared to the realities of the Royalty and Specialist Protection Branch.

What is the RSP Branch?

The Royalty and Specialist Protection Branch is one of three divisions which make up the Special Operations Directive of the Metropolitan Police. It was formed in 2015 to provide detailed and close protection to high ranking government officials and members of the Royal Family, as well as visiting Heads of State. There is also something known as the Specialist Escort Group (SEG), which is largely responsible for motorcycle cavalcades and the wider protection however, the series did not concern itself with this role.

The first inaccuracy of Bodyguard which must be addressed is exactly how David Budd came to possess the role. Personal Protection Officers who work in this environment will undergo rigorous training and an extensive selection process which is far more intense than most other roles within the Metropolitan Police Service.

Those who work within diplomatic protection work are routinely issued with 9mm Glock 17 pistols and whilst an ex-soldier such as Budd would have the necessary firearms experience, this would not allow him to bypass the application process. ‘Bodyguards’ in this area are serving police officers who throughout their career have shown the necessary skillset required to succeed in the demanding area of protecting prominent figures. The foiling of a terrorist incident therefore whilst admirable, would never lead to someone being headhunted for this role in the real world. Furthermore, the general advice given to members of the public is to steer clear of such incidents and leave it to they trained professionals i.e. the police and security services.

Another area which cannot pass without comment is Budd’s questionable mental state throughout the series. Presumably as a result of his experiences in Afghanistan, Budd is said to be suffering from Post-Traumatic Stress Disorder (PTSD). This would likely cause him to involuntarily and vividly re-live the traumatic events through flashbacks and other mediums. In addition, Budd may suffer from a symptom known as Hyperarousal meaning he may be constantly aware of exaggerated threats and is easily startled. With this in mind it is a fair assumption that Budd may not be suitable around firearms and the Police would air on the side of caution, never appointing him to the role of Bodyguard.

Want to brush up on your Commercial Awareness skills? Click here to read more. >>

Have Aspects of Bodyguard Happened in Real Life?

The final point to address is a bodyguard’s duties and how they were portrayed in the show. The Home Secretary Julia Montague was kidnapped and murdered which perfectly illustrates the fictitious element of the drama. It is true that the Royal and Diplomatic Command often finds itself in high stake situations for example: –

However, the kidnap and successful assassination of a cabinet minister is a step too far on behalf of the Bodyguard’s director.

The Bodyguard significantly deviates from the reality of how the Diplomatic Protection Service works, portraying it as a far more energetic designation than it is. The drama goes as far as to give the job a James Bond type persona when it reality it is often far more mundane. Despite these inaccuracies though; it is important to remember that the purpose of the show is to provide action entertainment as opposed to being a legal documentary.

For more recent law related news, click the links below: