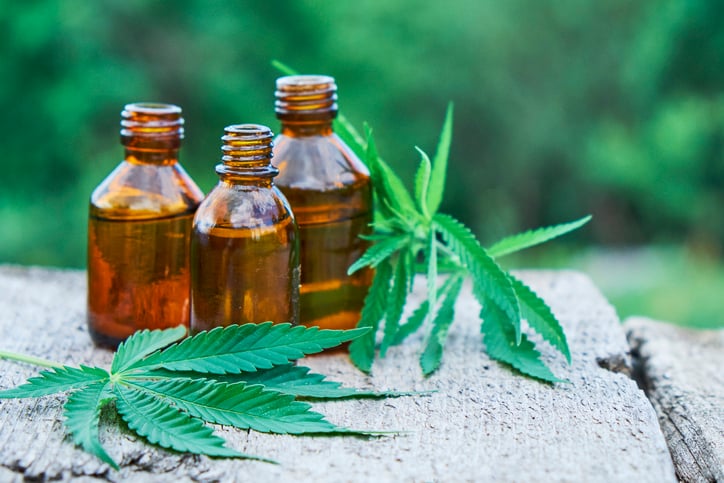 Cannabidiol, commonly known as CBD oil, is a natural remedy currently growing in popularity – but is CBD oil legal?

The oil is one of the numerous cannabinoids found in the marijuana plant. Unlike the Tetrahydrocannabinol (THC) cannabinoid found in cannabis, CBD oil does not give you the infamous sensation of feeling ‘high’.

CBD oil does not contain this psychoactive element and so does not affect the user in the same way as cannabis. Some consider CBD oil as preferable to relieve symptoms of pain as it does not have the mind altering effects of marijuana.

The sudden rise in fame of CBD oil could be attributed to social media, millennial culture and the relentless publicity from public figures. Celebrities such as Mike Tyson, Mandy Moore and Seth Rogen are known past users who have praised the effects of CBD oil. But how legal is CBD oil?

Read How Close is the UK to Legalising Cannabis? >>

CBD Oil for Medicinal Use

The law about CBD oil changed on 1st November 2018. the Government decided to act upon the Chief Medical Officer and Advisor for England’s recommendation that the class of Cannabis-based products for medicinal use be moved out of Schedule 1 of the Misuse of Drugs Regulations 2001.

This meant that all cannabis-based products for medicinal use in humans were moved to Schedule 2, with the exception of synthetic cannabinoids.

A cannabis-based product for medicinal use is defined as:

“A preparation or other product, other than one to which paragraph 5 of part 1 of Schedule 4 applies, which –

(i) a medicinal product, or

This move of cannabis-based products into Schedule 2 now means they can be prescribed where there is an unmet clinical need.

Read Legalising Cannabis: Why Is It So Controversial? >>

Scientific research now demonstrates potential health benefits of CBD oil. The most common ailments it has been claimed to help includes:

Participants were split into two groups, with group one receiving 600mg of CBD oil, whilst group two received a placebo. Both groups participated in a simulated public speaking exercise whilst researchers measured blood pressure, heart rate and other indicators of stress.

Results showed that the CBD oil group experienced a significantly reduced anxiety and cognitive impairment in their performance when compared to that of the placebo group. CBD oil has been valued by many as a more valuable alternative to antidepressants, as it acts quickly and does not cause the same side effects or withdrawal symptoms.

These are just a few of the most common medical uses for CBD oil, however there are claims that it can be used to treat more severe illnesses, such as: cancer spread, psychotic episodes and Alzheimer’s disease.

CBD Oil for Recreational Use

When looking at CBD oil for recreational use there are few benefits. As previously stated, it does not contain THC, the compound that recreational drug users often chase to experience a feeling of being ‘high’.

Some people choose to use CBD oil in a range of products, including the following:

Additionally, whilst it is considered to have fewer side effects than pharmaceuticals it must be noted that CBD does have some negative side effects too. These include but are not limited to: diarrhoea, changes in appetite and fatigue. It has also been observed to interfere with several other medications, so your doctor should always be consulted before beginning use. This ensures that using CBD oil won’t cause you any harm.

The law surrounding CBD oil differs between countries and it is important to understand the difference between hemp and marijuana derived CBD oil. The former is legal in most countries as hemp has no psychoactive effects. Therefore it is legal for sale, purchase and possession, unlike marijuana. Regardless, there is still a stigma surrounding it and people are continuing to question how legal CBD oil is.

Discover How to Become a Criminal Lawyer >>

What Countries Have Legalised Medical Cannabis?

This is not an extensive list and some countries have more restrictive laws that only allow the use of certain cannabinoids. In the United States 31 of 50 states have legalised the medical use of marijuana, however hemp derived CBD oil is legal in all 50 states.

Many countries in the EU have legalised medicinal marijuana, however EU law states that CBS products cannot contain more than 0.2% THC.

It’s evident that CBD oil has its benefits thanks to numerous unpaid endorsements from celebrities but how much of this promotion is rooted in actual experience? Are celebrities just trying to jump on the next fad? The legality of it can be confusing at times, with laws changing from country to country and regulations differing between the potency and the origins of the oil.

However, for a substance with minimal side effects and which is available via the safety of a doctors’ prescription, this could be the next step to easing symptoms. People may no longer have to be subjected to mass amounts of pharmaceutical chemicals and long-term withdrawal could be prevented. If this is the case, CBD oil looks likely to take the medical world by storm.

What is the impact of stricter US abortion laws?