The Big Debate: Is Brexit’s Impact on Law Firms Beneficial or Detrimental? 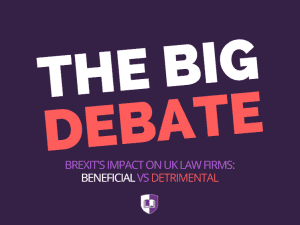 Brexit, Brexit, Brexit. Many have debated over the potential perks and disadvantages of the UK’s withdrawal from the EU. But how does Brexit affect law firms in the UK? And is it for the better or the worse? Here’s the debate.

The Big Debate: Brexit is Beneficial to UK Law Firms

“Taken as a whole, these drawbacks are certainly outweighed by the benefits that Brexit will bring to UK law firms in the short term” – Joe Blackmore, LLB student

I shall argue that the benefits of Brexit to UK law firms outweigh the drawbacks. Though admittedly there has been a recent fall in Merger and Acquisitions activity, this is a result of increased economic uncertainty following the vote to leave the EU rather than Brexit itself. This fall in activity can largely be attributed to companies putting off big commercial decisions until an exit deal has been finalised and as such should be remedied by March 2019 once the UK leaves the EU.

Whilst this may seem a long period of time, this damage is more than outweighed by the surge in demand for law firms’ services to help businesses understand and respond to changes in legislation. EU law has affected almost every area of domestic legislation so businesses will have to seek law firms help in order to adapt to new rules and take advantage of the opportunities this creates. For instance, in areas such as dispute resolution practice, Brexit will undoubtedly create more work for law firms as there will be more disagreements on how this new set of rules is to be interpreted. Take the example of the Department for Exiting the European Union which spent more than £1.2m on Brexit-related litigation last year alone.

Whilst law firms may suffer some drawbacks if Britain leaves the single market when passporting rights are lost, even this could offer benefits to law firms. International businesses will look to move more workers abroad to countries with these passporting rights so that they can remain competitive and trade freely within the EU. If this occurs, then law firms will certainly be the ones which benefit from consulting businesses on employment law and workers’ rights.

Taken as a whole, these drawbacks are certainly outweighed by the benefits that Brexit will bring to UK law firms in the short term which should provide them with an injection of capital and give them a competitive edge when they need it most during this transition period.

The Big Debate: Brexit is Detrimental to UK Law Firms

“The legal sector will be disproportionately impacted by Brexit in comparison to the wider UK economy” – Hannah Capstick, LPC student

Brexit will have an undeniably negative impact on lawyers active in areas as diverse as trade, foreign investment, property and finance.

The EU currently operates a ‘passport system’, which enables a financial services firm which is  authorised to carry out activities by one Member State to freely trade with and pursue business in another. Prior to Brexit, financial services institutions used the UK as a gateway into the EU’s single market. If Britain loses its ability to issue EU passports to companies many will relocate their European headquarters to other European capitals that can.

More broadly, if multinational companies view a post-Brexit Britain as too isolated from the EU, they may decide to close their UK operations.  HSBC’s chief executive, Stuart Gulliver, has stated that 1,000 roles will “move in about two years’ time, when Brexit becomes effective”. Moreover, the Swiss bank UBS has said that 1000 of its 5000 staff could be relocated to Frankfurt or Madrid.  Jamie Dimon, president of JP Morgan, has warned that 4000 UK jobs are at risk.  If financial services firms and multinational companies leave London, the legal work that they require will be transferred to firms in other European capitals.

Prior to Brexit Britain, and London in particular, attracted the highest level of commercial property investment in Europe. Indeed property consultants Knight Frank put commercial property investment in London at £31.7 billion during the year up to the second quarter of 2015.  Property experts have stated that there will not be a return to the steep rises in commercial and residential property prices that occurred in the two years to the end of 2015. This has implications for the real estate departments of firms across the country.

The legal sector will be disproportionately impacted by Brexit in comparison to the wider UK economy due to its reliance on demand from services which have been negatively effected by the decision to withdraw from the EU. As law firms lose business they will have to quickly find new sources of income in order to survive in post-Brexit Britain.

Impact of Brexit on Law Firms

Read more on this subject