London NQ salaries go up – but is it worth it?

Discover what it takes to be a newly qualified solicitor at the highest-paying firms in the UK and whether it is worth the paycheck.

Salaries reach new heights as the UK’s top-paying firms compete for their talent pool, but is the salary worth the workload? Find out which firms have upped their salaries, and what it takes to be a newly qualified solicitor in one of UK’s highest-paying firms.

Newly qualified (NQ) solicitor salaries in London have always been a grade above the rest of the UK, with firms defending the discrepancy with the higher cost of living that Londoners bear and the higher workload of many firms’ capital locations. However, with an unprecedented high of current salaries, led by US firm Kirkland & Ellis confirming a £172,000 salary for its NQs, the question is: is the salary worth it?

When looking at the question of whether the higher London salaries are worth it, the first point to mention is that not all London firms have upped their outgoings to the same extent. While many firms compensate for the increased cost of living in the city, the exaggerated earnings continue to rest almost exclusively in US-based commercial law firms.

For those aspiring solicitors whose interests lie in complex, corporate, transactional-based work, you’re in luck, with 100% of the top 10 highest-paying firms in London working within this market. However, while there has been plenty of feedback from insiders at US firms with large paychecks who say that the work is engaging, the nature of the large firms has been likened to the wild west, with trainees and junior lawyers left as an afterthought and handed “overwhelmingly drab due diligence work.”

Comparatively, smaller firms who engage in similar work, such as Ashfords, which has 500 employees across 3 national offices, as opposed to the larger firms who can house that in one of their locations, have a greater focus on training and providing more upfront responsibility.

Some may argue however, that the downfalls of some of the work at the larger paying firms are made worthwhile for the pay check, with firms like Ashfords offering its London based NQs a current salary of £58,000, £80,000 less than those firms at the top of the salary leader board.

London is notorious for its fast-paced environment, for both work and play, and working in one of London’s top-paying law firms provides no exception. The extortionate rates of pay are often met with seriously long hours and an ‘eat what you kill’ work culture which sees its solicitors work long hours in a fiercely competitive environment.

This isn’t dissimilar from London’s other high-paying firms, with solicitors from Latham & Watkins, the second highest paying firm in London, detailing in an interview, “sometimes you finish at 5pm; other times 5am.” 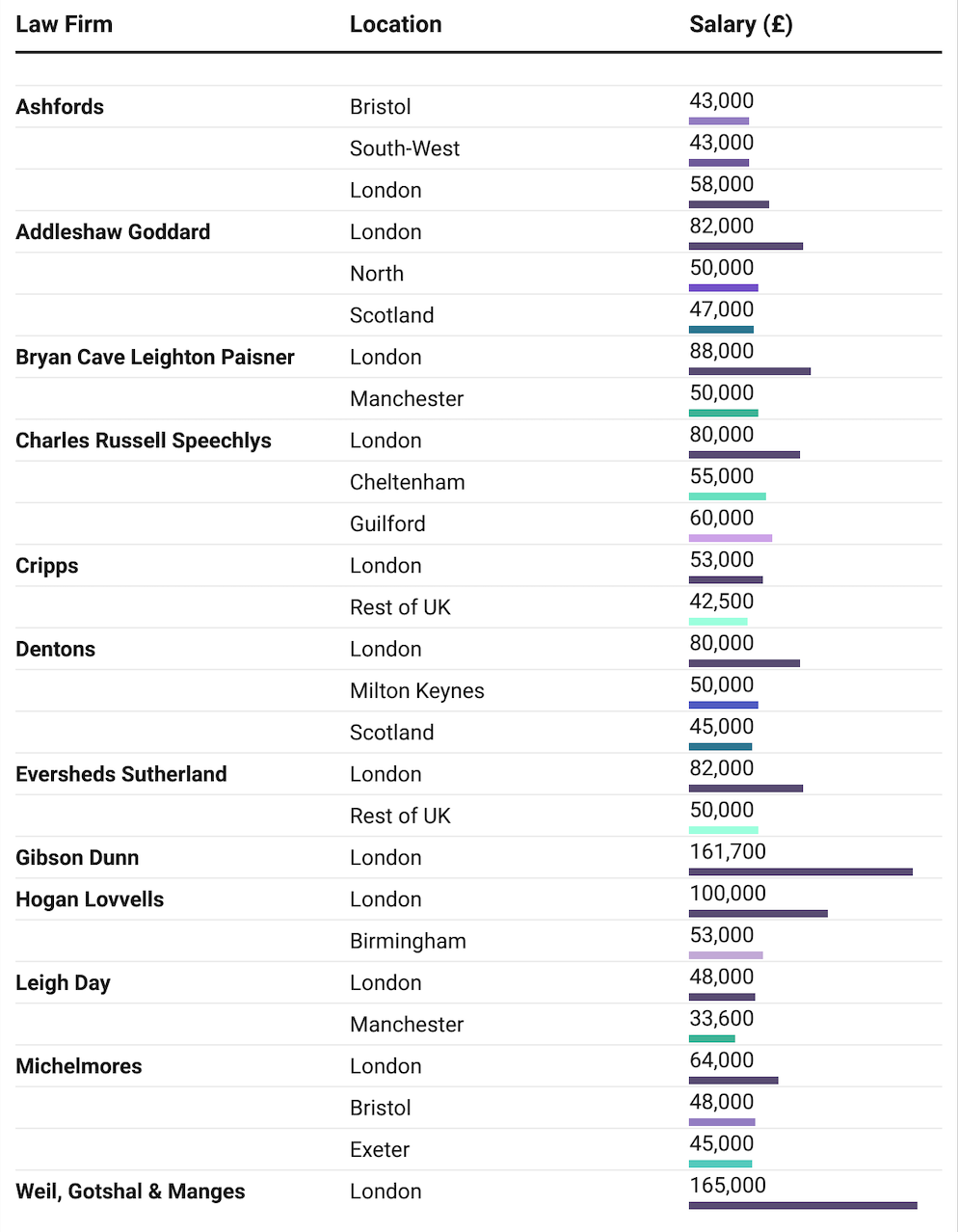 The cost of living

Living in London is an expensive undertaking for anyone, with Loughborough University’s 2020 study concluding that it was up to 58% more expensive to reach a decent standard of living in London than in other urban areas of the UK. Most law firms account for the swollen expense of living in London with ‘London weighting’ – an allowance added to salaries to compensate for the higher cost of transport, rent and supporting lifestyle of the capital.

However, not all London firms can be expected to pay the highest rates and a move to the city for the promise of a boosted salary may put you back.

Working in one of the top-paying London firms keeps the higher price of living a small price to pay, even without London weighting the firms at the top of the salary pyramid provide the means for expendable income even in the ‘big smoke’. Even those firms who have kept their NQ salaries far below the leading numbers offer on average £10,000 more for London-based employees than other UK locations, with Addleshaw Goddard offering £32,000 extra for its London-based NQs.

However, to work in a smaller London firm with lower economic advantages, the weight of the cost of living in London, even with the weighted salary, poses more of a restriction on the stretch of that paycheck.

Many would argue that living in a large city like London boasts a sought-after lifestyle that is worth the extra cost. However, Manchester, another large city in the UK providing the excitement and fast-paced feel of a city lifestyle while hosting similarly natured law firms than that of London’s leading payers offers rent at a 49.9% lower rate.

Property isn’t the only thing Londoners can expect to have to reach further in their pocket for: London-based employees can also expect to fork out 9.5% more for food and drink and 8.5% more for groceries than in Manchester according to Numbeo’s latest figures. As a result, in some firms, the higher rates paid in London than in other areas in the UK come with a tighter budget.

With the cost of living on the rise and an uncertain economic future on the horizon, Londoners pay checks will be stretched thinner. Many firms include a cap and collar arrangement whereby their salaries will be altered within a specified interest rate – the minimum being the collar, and the maximum being the cap.

This means that while the cost of living goes up, salaries may not keep up and London’s high prices will mean a tighter squeeze for those falling short of the leading pay checks in the city.

With all that has been said, each law firm, and each location, will offer its own unique opportunities. When it comes to answering whether the chase of a big salary in the big city is worth it, it is a very personal decision that can only be taken when looking at your own priorities and expectations, bearing in mind the facts laid out above.

See what it takes to become a solicitor before you embark on your journey.

See which area of law best suits your personality by taking our fun, two-minute quiz!

What does the new "super exam" mean for the legal profession? find out in our guide.

Commercial awareness is a vital skill for aspiring solicitors. What is it and how do you improve it?

An interview with... a STEM Trainee Associate at Herbert Smith Freehills

Why You Should Choose a Regional Office Training Contract

See what it takes to become a solicitor before you embark on your journey.

See which area of law best suits your personality by taking our fun, two-minute quiz!

What does the new "super exam" mean for the legal profession? find out in our guide.

Commercial awareness is a vital skill for aspiring solicitors. What is it and how do you improve it?