We Need to Make the Legal Industry Multicultural – Here’s Why 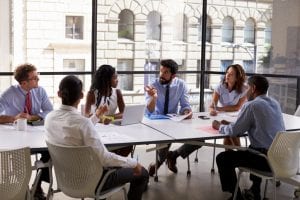 Multiculturalism can be defined as the coexistence of individuals from diverse racial, religious or cultural backgrounds in an integrated society.

This article aims to prove how, despite multiculturalism being both socially favourable and legally feasible, the legal industry fails to take full account of these benefits. A bigger push is needed to make the legal industry more diverse.

To explain why we should advocate a multicultural society, we can make use analogy of the salad bowl. Think of your favourite salad, if anyone can have a favourite salad. Let’s say it’s the timeless Caesar salad, with all the chicken, dressings and croutons. Now, would you still crave that salad if it was all just leafy greens? Most likely not.

A multicultural society is a perfect salad bowl. All components come from different plants, provide different nutrients and offer different flavours, each contributing to an exciting and diverse community of taste.

Assimilate this with a 21st century society. When individuals come from different backgrounds, they provide new experiences and offer varied perspectives, creating a well-rounded industry with the potential to initiate change. The ‘salad bowl concept’ testifies that variety and diversity are the premise of human existence, and therefore this should be reflected in the legal community.

It is in the public interest to prioritise using our differences to produce a productive legal society full of diverse opportunity.

Not only would a lack of multiculturalism abandon opportunity, it would also abandon the law. The jurisdiction of the United Kingdom can be used to illustrate this point.

Firstly, abandoning multiculturalism would violate the rule of law in the UK. Article 27 of the International Covenant on Civil and Political Rights mandates that:

‘In those States in which ethnic, religious or linguistic minorities exist, persons belonging to such minorities shall not be denied the right, in community with the other members of their group, to enjoy their own culture, to profess and practise their own religion, or to use their own language.’

This statutory requirement has also been reflected in common law. In their advisory opinion on the Minority Schools in Albania Case, 1935, the Permanent Court of International Justice held that protection of the minorities requires a state to work towards ‘preserving the characteristics which distinguish them from the majority.’

How can we actively disregard multiculturalism if our constitution wishes and seeks to uphold it?

Secondly, abandoning multiculturalism would breach our commitment to the European Convention on Human Rights. Why should non-British citizens residence in the UK not be tolerated by his or her neighbours? Preventing this would surely breach their Article 8 right to respect for private and family life? Why should someone of a Hindu faith not be provided with a place of worship? Would rejection of their non-Christian views not deprive them of their Article 9 right to freedom of thought, conscience and religion?

How can we out-rightly reject multiculturalism if this involves casting phenomenal oversight over our international commitment to humanity?

At a macro level, it may seem as though multiculturalism exists within law firms. According to the Solicitors Regulation Authority, both BAME and Asian individuals are comparatively over-represented in the legal industry. BAME and Asian individuals make up 18% and 12% of all lawyers, which is proportionally greater than the census data for their economically active peoples (13% and 7% respectively).

However, when looking at the partnership figures, it can be noted that this is where multiculturalism is failing to be promoted or practised.

The Legal Services Board (LSB), responsible for the management and administration of lawyers in England and Wales, has recently considered proposing a mandatory order on law firms to publish their diversity records. Will this encourage firms to prove to the public they welcome a diverse range of talent?

Unfortunately it is more likely that instead firms will use this as a platform to flaunt their high level of diversity amongst their trainees as opposed to their partners – giving false hope to aspiring applicants.

Evidently, to not promote multiculturalism is consistent neither with public interest, where the legal community seeks diversity to enable opportunity, nor public policy, where refusal to accept a multiculturalist values contravenes with the long-term international commitments in law.

However, although multiculturalism can be evidenced at the lower levels, the ‘trickle up’ effect has failed to be achieved and subsequently the legal industry has a lot to change before it can be branded truly multicultural.

We caught up with top law firm Bird & Bird to find out more about their Bursary and Pioneer Programmes, which have already assisted many young people on the road to a successful legal career.