Cracking the Case: Lighting Up Under Lock and Key 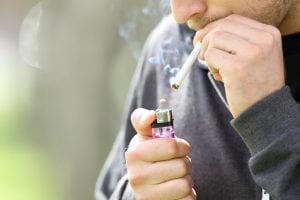 As everyone knows, it’s been illegal to smoke in public in the UK for years now – ever since the ‘smoking ban’ came into force on 1 July 2007, in fact.

The 2006 Health Act s2 that introduced the ‘ban’ is one of those unusual pieces of legislation that actually achieved its goal and has successfully driven down smoking rates ever since.

What may surprise you though is that there are a few exceptions to the Act. A clear one is in the theatre: an actor lighting up in a play, though in a space where other people are working, is not committing an offence.

But what about some of the other exceptions? Prisons, for example?

Looking for even more help with your training contract interviews? Register now for our free Training Contract and Vacation Scheme Conference!

Passive Smoking is Bad For You

This question was at the heart of the case of Black v Secretary of State for Justice [2017] UKSC 81.

The appellant is a non-smoking prisoner who has a number of health problems exacerbated by tobacco smoke. He argued that despite the smoking ban, he was regularly inhaling second-hand smoke from his fellow, smoking prisoners, and that all prisoners should therefore have access to the NHS Smoke-Free Compliance Line.

The Secretary of State refused, explaining that prisons are Crown property the smoking ban did not apply to the Crown.

At first instance, Singh J disagreed and found for the claimant, a ruling that was reversed in the Court of Appeal. The appellant then appealed to the Supreme Court.

The case ultimately revolved around the simple point whether parliamentary statutes bind the Crown. If they do, then the ban would extend to prisons. If not, then not.

Though a seemingly archaic tradition, it has long been the case that statutes do not bind the Crown unless this is explicitly stated in the statute (or such an implication is necessary to make the statute work at all).

Parliamentary draughtsmen are well aware of this, and so it might be assumed that this would be a simple open and shut case. The Crown was not included in the wording of the s2, and so is not included in the ban. This simple argument was lent more weight by the fact that other sections of the 2006 Act (Part 3 Chapter 1 s23 on the supervision and management of controlled drugs, if you’re interested) do explicitly bind the Crown. If Parliament had intended s2 to apply to the Crown, then it would have said so.

However, as became clear during the litigation, in discussions prior to 1 July 2007 Her Majesty’s Prison Service thought that prisons would fall under the ban. The Prison Service went so far as to draft guidance on the topic, issued in April 2007.

Lady Hale, giving the unanimous judgement of the court, held with ‘considerable reluctance’ that the Prison Service was wrong. S2 did not apply to the Crown, and so prisons are exempt from the smoking ban.

Although good idea, and generally desirable, for smoking to be banned in prisons, it was not the place of the court to ascribe to Parliament an intention that it did not have when enacting the ban. It remains to be seen whether Parliament passes a short amendment to the 2006 Act explicitly bringing Crown property into the remit of the ban

As a final note, one of the curious side-effects of this judgment, well recognised by the court throughout, is that other Crown properties are also not bound by the ban. This includes, for example, central government department buildings. These typically all have non-smoking guidance or instructions issued by building managers, say, but these are just that; instructions. They have no legal force.

Thus we are in the curious position where is it illegal to smoke in hospitals, but not in the Department of Health.

Want More Law News? Take a Look at These:

You can expect to get the ultimate insight into how to get a training contract - with contributions from lawyers and top firms. Book today!